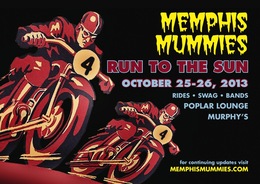 Saturday, 10/26/13
FRS POWERSPORTS - 10am
Breakfast, coffee to recharge the brain cells you killed on Friday, and Registration Packs. RIDE BEGINS AT 11am SHARP.

Savin' Babies. It's just what we do. 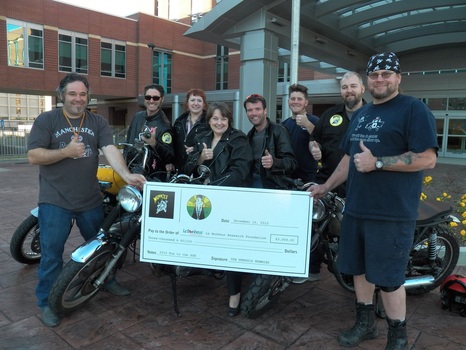 On a serious note - Le Bonheur Children's Hospital cares for children far and wide who need special services. We are extremely proud to support their mission to serve the needs of our youngsters no matter their insurance, income, or health status. The Memphis Mummies are a group of motorcycle hooligans with no boundaries. We take all comers, and embrace the "welcome everyone" philosophy. Similarly, Le Bonheur takes all kids. With 40 different specialists, and state-of-the-art facilities, they take care of the little ones who need the most care.

Our events and efforts over the course of the year will continue to benefit this organization. Whether it's rides, fundraisers, rock shows, or donation drives, the Memphis Mummies are committed to supporting Le Bonheur.

Let's DOUBLE next year's giant check!!! RTS:4 IS ON THE WAY! 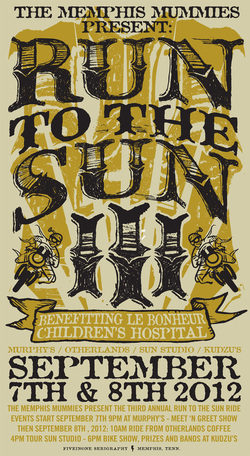 Run to the Sun: III was a stunning success - for us, for Le Bonheur, for Kudzu's, for everyone involved.

Our Meet 'n Greet at Murphy's was rained out but still saw an AMAZING crowd for El Dorado and the Ruckus, and Joceephus and the George Jonestown Massacre. Booze, badass rock 'n roll, and bikes were in as full of force as possible, despite the uncooperative weather.

Saturday redeemed Friday COMPLETELY! The weather was *perfect* and it could not have gone better. Bikes and scooters gathered at Otherlands for coffee and camaraderie at 10am, and everyone took off at 11am for a ride to the forest at 11.

Although rain from the week and night before had tree limbs all over the course, the forest run was totally successful. No one had to call up the emergency truck. And everyone enjoyed the tour through Memphis. Especially because it was followed by STUFFING our faces with barbeque at The BBQ-Shop.

An early tour at Sun Studios, and bike show at Kudzu's  saw a LOT of  participants.  Hooligans from Memphis and beyond were there to enjoy great food, great friends, and great bikes.

As the evening wore on, we started up with a fantastic Memphis band (Dyna Flow!), and kept the energy up with INCREDIBLE raffle prizes from some of our great sponsors: Sun Studios, Cycle Center, Performance Plus, Fulmer Helmets, Memphis Triumph, Pritchard's Distillery, Vintage Cycle, Chuck Leo, Joel, and Bellevue Motorsports. (PLEASE let us know if we forgot to mention you.)

All told - when the event ended - we raised a SUBSTANTIAL donation for Le Bonheur Children's Hospital. Final totals aren't in yet, but we're going to blow last year's donation out of the water! SAVIN' THE BABIES!

THANK YOU ALL FOR YOUR HELP!!! The Memphis Mummies are incredibly grateful for the all of support we received this year. Looking forward to RTS4!

But for now, my liver needs a freakin' nap...

BANDS ANNOUNCED!!!
Friday at Murphy's - ElDorado and the Ruckus, and Joceephus and the George Jonestown Massacre
Saturday at Kudzus - Dynaflow, and William Stull
BOTH nights will feature the sleazy rock 'n roll stylings of the infamous Memphis Vic!

Shows only $5 each! And ALL 5 of those dollars go to Le Bonheur Children's Hospital. WE'RE SAVIN' BABIES, Y'ALL!!

You heard me, 'Birds! The Memphis Redbirds, that is. Join the Memphis Mummies for a very special event: Wet-your-Whistle Wednesday, sponsored by PBR! Come see your favorite AAA Team and your favorite motorcycle hooligans take the field. $10 gets you a ticket, a 16oz PBR, and a free PBR koozie. Wednesday has never been so rad.

Meet at The Young Avenue Deli at 2pm for snacks and instructions on how to participate in this our FIRST ANNUAL POKER RUN! (Don't know what a poker run is? See this)

$10 admission - 50/50 split...so the more friends you bring, the more money you have the opportunity to win! Yes, passengers count too, but passengers pay too.

Young Avenue Deli hosts the Godfather of Psychobilly, Reverend Horton Heat. As well as the Supersuckers. While the name indicates otherwise, these cats definitely do not suck. In fact, quite the opposite. Raucous rock n' roll, excellent beer selection, and Mummies. You can't POSSIBLY have anything better planned for Saturday night. 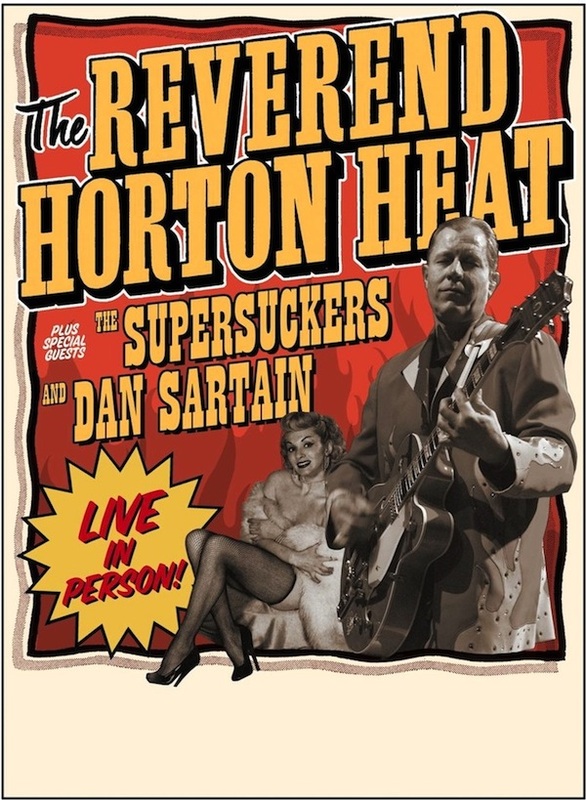 After a VERY successful Run to the Sun 2011, the Memphis Mummies donated $1,500 to LeBonheur Children's Hospital. Presented personally to LeBonheur
President, Meri Armour. 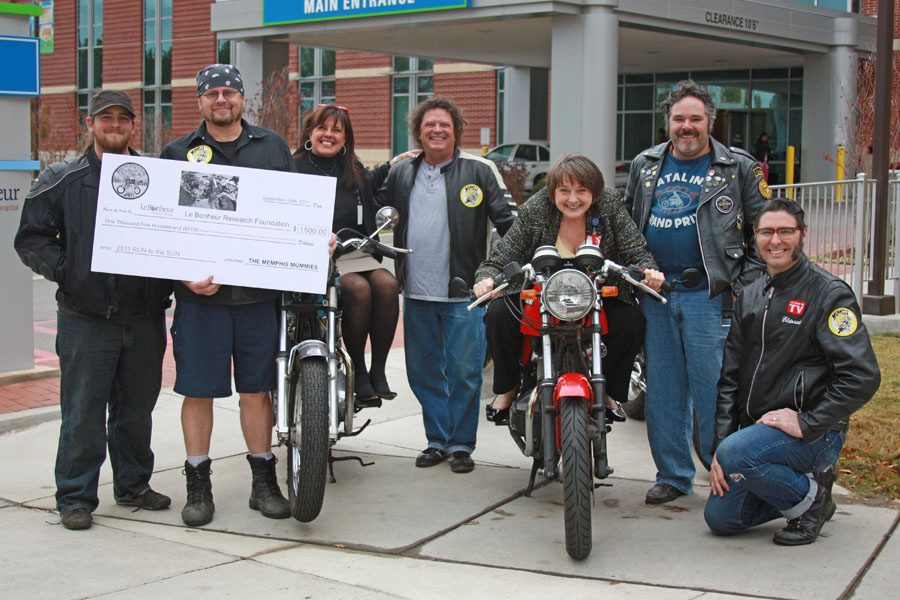 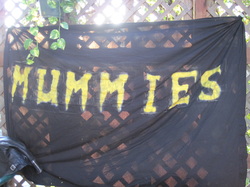 We started the weekend with a great Meet n' Greet at Murphy's. Great friends and REALLY great bands (ElDorado and the Ruckus, Rudy G and the Hi Tones, Babs Martin and the Trip, and The Sin City Scoundrels). Lots of folks came for awesome rock and roll, as well as a great cause: Le Bonheur. We closed the night way ahead of our event total from last year.

Saturday morning saw 30+ bikes and scooters gathering at Otherland's for coffee, camaraderie, and headache relief.  The ride took off at 11am under sunny skies, riders fully caffeinated and ready to rock out to the Shelby Forest. After a scenic ride to the Forrest General Store and tour through the forest, our guests enjoyed lunch at The Barbeque Shop.

Full of pork, slaw, and anticipation, rockers and mods alike took on a tour of the world famous Sun Studio; home of Johnny Cash, Carl Perkins, Elvis Presley, Jerry Lee, and 100s of other infamous rock 'n rollers. Mummies mingled with history and it was time for the festivities to begin.

Kudzu's (Mummy HQ) was set and ready for guests, with Memphis vendors sharing their creativity. Vini, Live From Memphis, Tennessee Tease Burlesque, Guerillamonster Films, Vegetative Skates, and our Chicago Ton-Up brother, Fletch, were there to hock their wares and promote everything Memphis/cafe.

Bands kicked off with the badass ladies of Swamp Donkey, and just got badass-er from there! Kill, Baby...Kill, The Sun Studio Trio, and Joeceephus and the George Jonestown Massacre, melted faces and rocked socks off well on in to the night. In addition to our music line-up, we had a really great offering in our raffle. Donors included: Fulmer Helmets, Triumph of Memphis, Sun Studios, Chuck Leo Kawasaki, Fletcher's Bike Shop, Studio MacKenzie, and Cycle Gear of Memphis.

As an added bonus, Live From Memphis filmed the whole event! From start to finish, they were there with cameras rolling, documenting the madness. Look out for a video in the next week or so!

Here's what you've all been waiting for, the grand total! Le Bonheur is one of the best children's hospitals in the country, and we're proud to say we've raised $1500.00 this year! We couldn't have done it without all of your support. HUGE thanks to all or our guests, vendors, bands, support staff/volunteers, donors, and friends. Without you ALL we couldn't have done it!!

We're looking forward to next year! And to our guests from AR, TX, IL, FL, OK, and even Sweden, THANK YOU for your support! 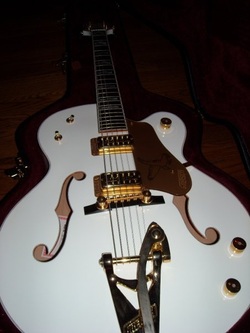 Eldorado and the Ruckus are heading out on a nine day tour of the North East,"Ruckus Rampage 2011." We are kicking off the tour at Murphy's. DJ Memphis Vic is going to be spinning records and our friends The Bluff City Backsliders are also playing. See ya there! 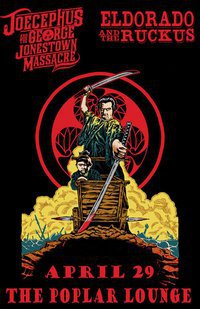 The most badass combo of ROCK and ROLL you've ever seen. The POPLAR LOUNGE has never seen a combo of these proportions. Face melting, and missing socks to be expected. Be there!!! April 29th, 2011. 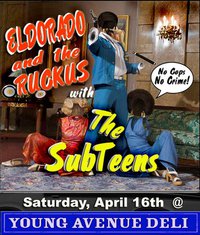 Come watch your favorite cafe ridin' Rockstar tear up the stage at the Young Avenue Deli with the Subteens. Memphis rock for the *serious* rocker. 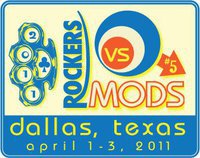 Memphis was in rare form in Dallas. As usual.

Larry, Jason, and El Dorado made the trek from the Mid-South to Texas to rep' for Memphis, and hilarity ensued. With tons of other Ton-up-ers, a great time was had by all. Check out the photos and video in the "Look at THIS" section! 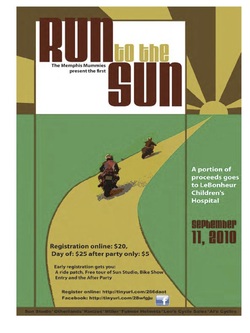 The FIRST ANNUAL Run to the Sun, hosted by the Memphis Mummies Cafe Racer Club.

Bands, bikes, beer, and a badass time! See photos in the "Look at THIS" section!